The mother/child relationship over time, through sickness, care and–finally–death, forms the emotional core of Kathyrose Pizzo’s  moving solo exhibit After A Thousand Mornings, now on view through March 25th at Hatch Gallery in Hamtramck. Multiple sclerosis, her mother’s diagnosis, has given the artist a front row seat at this most mysterious and universal human rite of passage, and she has clearly thought long and deeply about the experience of her mother’s decline and her part in it.  She observes in herself the shifting emotional dynamics of care and conflict, love and resentment, grief and recovery, rendering them in physical space through the patient assemblage of sticks and strings.

The artworks are binary in nature, with wooden constructs that seem to either support or confine cloud-shaped gray pillows.  The softness of the cloth clouds, juxtaposed with the hardness of the provisionally composed structures, shifts in meaning  from piece to piece, the cloud in one artwork seeming to refer to the artist, in another, to her mother. Sometimes the cloud is  imprisoned by the scaffolding and at others it seems to float above and away.  Throughout, the two elements circle and collide, metaphors for a kind of emotional dialog between these intimately connected human beings.

Caught eloquently captures the dilemma of the cared-for and the caregiver, mutually trapped by circumstance. A wire net  that mimics the failing synapses of her mother’s brain confines both the cloud and the wooden support to the ground, metaphorically trapping both mother and daughter beneath the disease.

Pizzo is also interested in examining the end of life through the lens of  social rituals in cultures past and present. She particularly acknowledges the influence of Joseph Campbell, a philosopher known for his work in comparative mythology and religion. She says of these rites, “Tributes to the departed are the events that make us human, that define the distance between us and the stars.”

This influence is most directly referenced in Departure. The artist has created a small scale replica of a funeral pyre, upon which a lovingly pillowed figure rests.  Underneath,  a chaotic and disordered pile of kindling  mirrors the artist’s mental state.

Many of the works in After a Thousand Mornings refer to the passage of time and convey a sense of waiting.  Wall pieces such as Calypso and Episode 1: The Ladder are improvised and complex structures created  by the artist using aluminum tape, which is then partially stripped away as the composition emerges. The title work of the show takes on the theme of time’s passage most directly, with 30 tiny wooden scaffolds topped by cotton clouds and arranged in a grid –a kind of  calendar–quietly  and elegantly filling one wall of the gallery.

The incremental passage of time that forms the rhythm of life and death is the ultimate theme of After A Thousand Mornings. The artworks are a physical manifestation of this process, small moments turning into large ones, one moment adding to another, making up a life and bringing us inevitably to its end. Kathyrose  Pizzo has found meaning here:  “Personally witnessing both how disease can bring forth  greater understanding of the human condition and the unavoidable destiny of all life is central to my work.”

For more information about Hatch Gallery and After a Thousand Mornings, go here.

Somewhere over the Rainbow is Another Rainbow at Hatch Hamtramck is Shaina Kasztelan’s poison pen love letter to kitsch and consumerism.    This Detroit artist and recent CCS grad  seems to simultaneously love and hate the symbols and materials that she uses to create her wildly entertaining  installations, paintings and sculptures.

Many artists in Detroit  are enthusiastic collagists of  gritty urban substance,  their  artworks depending on the inherent material  integrity of the parts to lend credibility to the whole. In contrast, Kasztelan employs the same assemblage method but uses materials that are the antithesis of authenticity.  They are, in fact, intentionally notable for their fakeness. The color is super-sweet, the forms mass market.  She  combines polyester fur, hobby shop jewels, plastic inflatables  and synthetic hair in obsessive aggregations, reaching new heights of  over-saturated,  over-the-top  visual hysteria.

I was surprised to learn that this is Kasztelan’s first  solo show.  The work seems confident, the installation expert.   The friendly yet knowing mood of the exhibit reminds me most of John Waters’s movies with their gleeful embrace of low-brow mass culture and transgressive imagery. 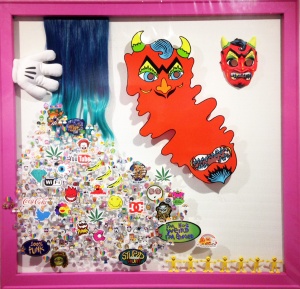 Kasztelan seems especially  at ease in three dimensions. The most assured and  ambitious work in the show, entitled The Alien with the Drake Tattoo/Dedicated to the Butterfly,  is a kind of altar (complete with Juggalo nativity) that seems to burst out of a black cloud (of depression?)  She seems less at ease in the conventional rectangular format of her paintings, which felt a bit awkward to me. But she has very cleverly circumvented this unease in The Devil’s Vibrating Smile by applying the  imagery to clear vinyl. My favorite piece was a fake fur potted plant infested with tiny toy babies and topped by a pink plastic bouffant, entitled Baby Cactus is Happy. This show made me happy too.

Somewhere over the Rainbow is a Double Rainbow is at Hatch Hamtramck until May 28.  For more information for hours and events go here.

The non-profit artists’ collective and gallery Hatch Art  has purchased  Dmytro Szylak’s Hamtramck Disneyland, an extensive outdoor installation of handmade folk art along with the  two homes located on the property. Szylak, a Ukrainian immigrant and former GM autoworker,  created the work beginning in 1992. It was completed in 1999. He died in 2015 at 92, leaving uncertain prospects for the property and its art.

For a time inheritance disputes left the future uncertain, but recently the homes – and the art – were put on the market with the expressed preference of the seller (although not the requirement) that the work remain intact. To the relief of many, Hatch Art has stepped in to purchase and preserve Hamtramck Disneyland.

Hamtramck Mayor Karen Majewski calls Hamtramck Disneyland “a work of a premiere Hamtamck artist,” a “tourist destination worldwide,” a “neighborhood institution” and an expression of the immigrant and working-class experience in Hamtramck. “There is no alternative but preservation,” she adds.

Scott Collins, president of Hatch Arts’ board of directors, said his group purchased the property after obtaining a private loan. He said they plan to open the houses to tenants this summer, and start restoring and sprucing up the backyard artwork.
One goal is restoring the electric lights around the installation that haven’t worked for years. “We are going to make a lot of extra efforts to preserve the art,” Collins said. “It’s been a landmark in the city for a long time. It’s a great example of Hamtramck history, immigrant history and the independent arts scene.”