The Detroit art scene is in the midst of changes. Over the last year or two, shiny new galleries like Wasserman Projects, David Klein  and Gallerie Camille have established themselves in downtown and midtown, with regular hours and regular shows. But for those of us who like to hunt for art in less established–and less gentrified–corners of the city, there are still new discoveries to be made.The Factory at 333 Midland in Highland Park is one of them.

This rambling, 23,000-square-foot industrial complex, formerly the Lewis Manufacturing and Stamping plant, was recently purchased by New Zealand-born sculptor Robert Onnes and provides studios  for himself and 17 other artists. The space is still in the process of being upgraded–they are raising money to put in heat this winter– but that hasn’t stopped them from putting on an ambitious group show that is installed throughout the  main building and its nearby, newly-opened exhibit gallery. Big Sculpture@The Factory includes work by over 50 artists and displays more than 200 sculptures and installations, both large and small. It is open on weekends only until October 22. Music, food, drink, and scheduled artist talks are thrown in for good measure. On the day I attended there were plenty of visitors taking it all in.

Artists in Big Sculpture range from emerging to eminent, with a few of my favorites represented by some of their most ambitious work.  Mega Bat, by Tim Pewe, has a wingspan of over 17 feet, and hovers overhead in the studio of the owner, Robert Onnes, who makes visually massive but lightweight formalized figurative sculptures. His Kiwi, a birdlike shape that rests outside the building in an open courtyard with other large scale sculptures, elegantly references his land of origin.

Some of the smaller works in Big Sculpture are displayed in a room  adjacent to the main studio,  and include the delicate, toy-like yet slightly sinister assemblages of Catherine Peet.  Wall sconces made of old metal toy trucks by Alvaro Jurado light the hallway. One of my favorite pieces in the show, Hell in a Handbasket by Sandra Osip, leans up against a wall nearby.  A collection of tiny houses made from scraps of demolished Detroit homes is piled high in a wheelbarrow, stacked and ready to be discarded like so many of the city’s derelict structures. It’s both playful and sad.

It’s impossible to describe all of the imaginatively conceived and well-made works in Big Sculpture.  In spite of the rough surroundings, the overall mood of the exhibit is light-hearted and inventive.  There were plenty of visual puns like Melancholy Hammer by Adnan Charara and Chris Zagacki’s Hook, Line and Sinker. Single Digit, by Rick Cronn, literally gives us the finger.

The new exhibit space in the smaller building adjacent to the main structure houses yet another trove of excellent work; Inuit Spirit by Tom Phardel and Beings Connected by Charles McGee were standouts.  A newly constructed balcony  wraps around the periphery of the gallery.  It provides a more intimate venue for smaller works like Architectural Exploration by Leah Waldo, one of a series of block-like objects of cast glass, steel and low-fire soft brick.  Also  notable are the felt and wood constructions of  Susan Aaron-Taylor. I particularly liked Fears, which shows a mouse-like creature trapped in a ribbed structure.  Ann Smith, one of the artists I met during my visit, told me that other exhibits will be scheduled in the new gallery space, though there is no published schedule yet.

Bird Clown Listening to the Messenger by Catherine Peet 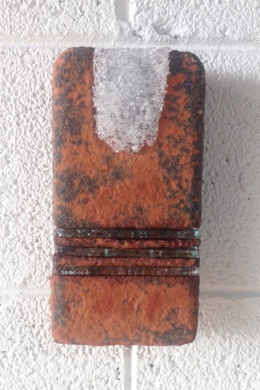 There’s still time to see Big Sculpture! The exhibit is on view until October 22 and by appointment.  For more information and to check on scheduled events,  go here.