In this dreary  and discontented winter season, Public Pool in Hamtramck aims to treat our tired eyes to Printers Without Presses, an exhibit of informal and mostly one-of-a kind printed artworks that “by hook or crook explore ingenious methods of printmaking.” This loosely organized collection of Public Pool regulars  (and their friends) showcases artists who are fully literate as conventional printmakers but who, for the purposes of this show, have discarded the more technical aspects of the printmaking process to create work that is  personal and playful.  Several of the artists are gifted  writers as well as visual artists, so text  and narrative content play an important role, resulting in  a roomful of fresh, unassuming and conversational artworks.

Chicago/Milwaukee artist and accomplished printmaker Tyanna Buie seems not limited but liberated by the simplicity of her means.  She employs hand applied ink, hand-cut stencils, collage and photo-based digital images to create Object and Ritual an ambitiously scaled, three-dimensional sculptural print that dominates the center of the gallery.

The seamless connection that the artists display between their online worlds and the lo-tech, hands-on life in the studio is striking.   Matthew Milia describes  “What’s a Print”, his hand-stenciled rendition of a cell-phone text complete with reception bars and battery status,  as an attempt to playfully “subvert the instantaneous, sometimes mindless facility modern technology has afforded correspondence.” Dessislava Terzieva freely admits her piece “We didn’t Start The Fire” is the result of an internet search.

Three of the artists share an interest in the urban natural world of Hamtramck and have clearly influenced each other.  In  Baby’s Breath and Obsolescence, Keaton Fox compares and contrasts the marks created by inked baby’s breath with the trail of a computer mouse as it is dragged along the surface of the paper. Teresa Peterson and Anne Harrington Hughes have each put together a collection of leaves which they have subsequently used to create print series that are visually related but thematically distinct.

Jeffrey Evergreen and Bayard Kurth III rely on text to convey their colloquial content. Evergreen’s small printed brown bags fit seamlessly into the world of Hamtramck’s bars and he has humorously directed gallery visitors to take one but only “wrapped around a beer.”   In addition to  prints in the exhibit, Kurth has produced a zine “Improve Your Fishing” which establishes that he is a writer and thinker as well as a doodle-ist. Though not formally included in the show,  another zine Stupor/Soft Gun, part of an ongoing series by  Knight Fellow Steve Hughes and with illustrations by Alexander Buzzalini  (who is in the show), merits attention and you can buy it for the low, low price of $2. 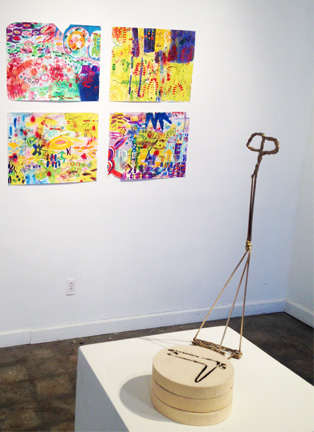 More purely visual, as opposed to text-based,  pieces are provided by Jide Aje and Tim Hailey.  Although they trend toward painting with a more distant nod to printmaking, they  still fit within the rather loose parameters of the show and provide some nice shots of color.

Alexander  Buzzalini contributes a Giacometti-esque branding iron that somehow also recalls his characteristic gloppy painting style. This is accompanied by several branded discs that might be coasters, and the whole thing ties in  with his ongoing interest in imagery of the mythic old West. For more about Alexander Buzzalini you can go here to read an essay written (not too co-incidentally) by Steve Hughes, his collaborator on Stupor/Soft Gun.

Like many of the non-profit art spaces in Hamtramck, Public Pool has limited hours, but it’s well worth your time and effort to see this work, on view until February 25. Artists in Printers Without Presses are: Jeff Evergreen, Jide Aje, Bayard Kurth III, Teresa Petersen, Alex Buzzalini, Mathew Milia, Tyanna Buie, Keaton Fox, Anne Hughes, Tim Hailey and Dessislava Terzieva. The gallery is open on Saturdays from 1 to 6.  For more information on Public Pool, go here.