Despite its prosaic title, Book+Paper Arts  packs plenty of charm and  interest into a tiny gem of an art exhibit on view from now to July 30 at WSG Gallery in Ann Arbor. The art books and some additional paper-based art works represented  are approachable, interactive, playful. Travel and globalization, the book as historical artifact and its position in relation to new media, and  the components and ordering of meaning within an artwork are just a few of the themes addressed.  The participating  artists are clearly in an ongoing creative dialog through “book shaped objects” in various configurations, each type with its conceptual strengths and limitations.

This is the seventh in a biennial gallery exhibit series, Beyond Words, curated by Barbara Brown, noted book artist and lecturer in book arts at the University of Michigan Penny W. Stamps School of Art and Design.   She describes her  curatorial aims for this particularly varied selection of paper based artworks:

In previous show statements, I have put forth the assertion that the term ‘artist’s book’ often triggers much discussion, even bickering and irresolution amongst book artists, and the point has sometimes been made that at the very instant one uses that term, one must then be ready to define it and to defend the definition! There will probably never be a determination that everyone agrees on, but I like ‘book inspired art’ (or even BSO – book shaped object), and for me, that is a good beginning”.

Travel, through time, through space,  is a recurring theme throughout this exhibit. The molded paper mini-installation entitled  Memorial to Thylacines and Our Slaughtered Michigan Wolves by Ted Ramsey describes his trip to Tasmania during which he encounters memories of  the  extinct Tasmanian Tiger, a species of carnivorous marsupial.

Norma Penchansky-Glasser, inspired  by a trip to Idaho, has created a varied and beautifully hand-crafted suite of books. A particular favorite of mine was Boise Aquarium, a tunnel book that features tiny silver fish swimming within a paper proscenium. (The tunnel book  was new to me, and several artists created these for the exhibit. This form had its origin in the 18th century as an easily portable souvenir for tourists.) 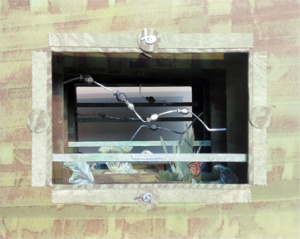 Jack O. Summer’s Mapaloopsa,  in which he meticulously re-configures various maps into an invented  world atlas, humorously illustrates globalization and mass migration.  In one map, Dearborn meets Quebec, which has sidled up against Burma. We are sharing a smaller and smaller planet with new neighbors who make strange bedfellows.

The block book form receives special attention from several artists in this exhibition. These collections of wooden blocks lend themselves to the exploration of multi-sided meaning and the ordering and reordering activity it allows. In Blocks of Time by Ruth Bardenstein,  each constituent block side  contains ancient alphabets or astronomical images or clock components.   Alvey Jones’s  Encrypted Alphabet addresses the written word and constructed  meaning. One side of each block has a picture inscribed with  a written word that bears no obvious relation to the accompanying picture, leaving the viewer to puzzle out the implied relationship.

Books with digital components make an appearance here too, with Barbara Brown and Howard White’s Midsummer, a tunnel book with video.  The most conceptually complex artwork in the exhibit, to my mind, is  Algorhithms by Ian McLellen Davis and Meghan Leigh Forbes. This is a collection of pamphlet musical exercise books which can be played in any order with an accompanying “music box” of recorded fragments which can be activated by the listener (who then becomes the “player”). Added to all this are some  beautifully produced pamphlet books containing bits of Roland Barthes’ intriguing thoughts on music available for the taking (I took one).

I spent quite a bit of time in Book+Paper Arts without ever feeling I  had completely grasped all the formal and thematic intricacies of the exhibited works.  I only wish that more space within the gallery had been  devoted to the exhibit. I realize that in a commercial gallery space is money, but these pieces deserved more room than they got.  A few more inches around each piece (or even an additional wall) would have contributed a lot to my enjoyment of this museum-quality small show. 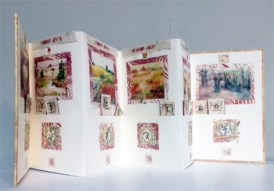 One thought on “Beyond Words at WSG Gallery”